About the University
History 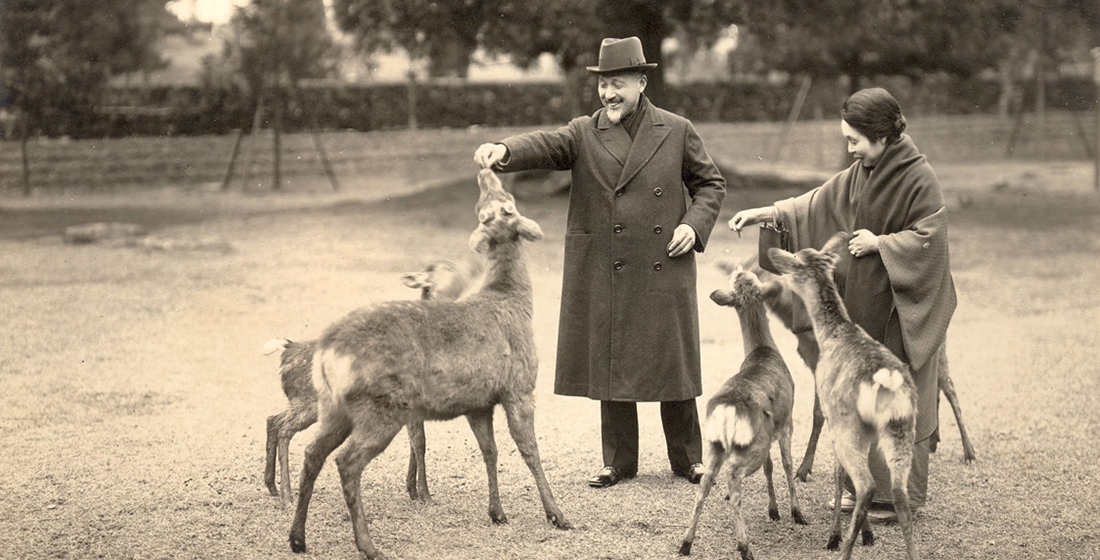 Hisashi Uda (1881-1968), the founder, was an aspiring businessman, Orientalist and educator. His father, Renpei Uda (1840-1906), was a professor of ethics at the preparatory course of Tokyo University and played an active political role in the Meiji Restoration.
Aware of the importance of higher technical education for women to improve their social status, Hisashi Uda was convinced that the profession of medical specialist (particularly in dentistry) was especially suitable for women. 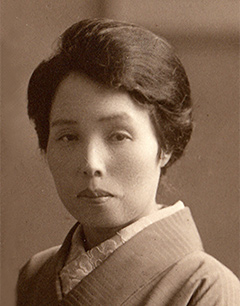 Ai Uda (1883-1982), the wife of Hisashi Uda, was one of the rare women of the Meiji Period with a college education in English literature and a Christian background. Amid the changing times, she came to believe that foreign language education was indispensable for enhancing the social status of women and for preparing the nation for a rapid move towards internationalization. In 1926, responding to the request of the Ministry of Education, Hisashi Uda took over the administration of Meika Women's Dental College (1917-1926), and launched his educational undertaking under the new name of Toyo Women’s Dental College. This became the forerunner of present-day Toyo Gakuen Univerisity. “Toyo” means “Orient or East Asia.”
A competent entrepreneur, Hisashi Uda reinforced the school’s financial foundation, and due to his commitment to Oriental ethics, he incorporated Oriental-based liberal arts education into the curriculum of dental medicine.
Before World War II, there were only two dental colleges for women in Japan. Toyo Women’s Dental College became the first women’s dental college accredited under the Dental Practitioners Law. During its years of operation, the college trained about 3,000 dentists at the site of the present-day Hongo Campus. 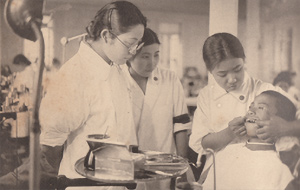 An athletic meet on a post-war day at a ground of a defunct Imperial Army base, a war-time evacuation site Inheriting the founder’s educational philosophy for women’s self-reliance as well as responding to the damage from World War II and the post-war educational reform, Toyo Women’s College was founded by Ai Uda in 1950. The new school, reconstructed painstakingly from the ashes of war, was a liberal arts junior college with a Department of English Language and Literature.
Toyo Women’s College achieved remarkable development from 1956 through 1964, when Kiichi Aichi (1907-1973), former Minister of Finance and Minister of Foreign Affairs, served as president. This was a time which coincided with Japan’s dynamic postwar recovery and spectacular economic growth.
The campus underwent major renovations from 1961 through 1985, which culminated  with the “Phoenix Mosaic”, a mural composed of colorful ceramic pieces decorating the exterior of the headquarter building.
In 1967, the college built a second campus in Nagareyama, Chiba Prefecture. In 1973,
The Post-Collegiate Program was incorporated as an extention of the Department of English Language and Literature. In 1982, the Department of European and American Studies was inaugurated with a special focus on area studies and English-language education for practical usage.
Thus, Toyo Women’s College grew into a leading junior college in Japan, and its accumulated educational expertise consequently provided a valuable cornerstone for four-year Toyo Gakuen University. 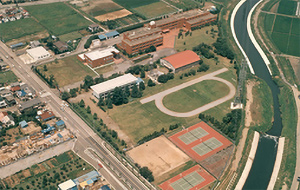 Nagareyama Campus in the days of Toyo Women's College Based on what was accomplished by its two predecessors in women's education, Toyo Gakuen University, a four-year coeducational university, was established in 1992 at the Nagareyama Campus. Inheriting the legacies of Toyo Women's College, the Faculty of Humanities developed the curriculum concentrating on English language education and the enhancement of international awareness. As Toyo Gakuen University continued to grow in the global age, the Faculty of Business Administration began operation at the Hongo Campus in 2002 for the purpose of teaching practical business administration. Meanwhile, in 2002, the Faculty of Humanities further expanded its program by launching the Department of Human Sciences.
Completing its mission, Toyo Women's College was closed in 2006 in a smooth transition that handed over all its educational functions to Toyo Gakuen University. In the same year, the university took another major step to make the best use of respective campuses for the benefit of students. Consequently, freshmen and sophomores study liberal arts and language programs at Nagareyama Campus in a relaxed country setting, while juniors and seniors pursue study centered around professional education at the Hongo Campus in central Tokyo. The construction of a new Building 1 at Hongo was completed in 2007, marking another step forward for Toyo Gakuen. It is an eco-friendly intelligent building equipped with a functional library, multi-purpose "Phoenix Hall" with a simultaneous translation booth, and roof-top garden.

The Graduate School's Masters of Business Administration (MBA) Program was established in 2008 with the purpose of advancing knowledge and professional education gained at the undergraduate level.

The Faculty of Global Communications and the Faculty of Business Administration are located at the Hongo Campus, and the Faculty of Human Sciences is located at the Nagarayama Campus. With this reorganization, students can study at the same campus throughout their academic years. Additionally, a new program ‘the International Career Program’ (ICP) has been launched. This allows students to take courses in English while working towards a qualification within their specific faculties. ICP includes a one-year mandatory study abroad at a partner university, providing an environment for cultivating a true global citizen with the communication skills and education to function in the 21st century.

The university integrated the faculty functions of Nagareyama Campus into Hongo Campus in April. As a result, all students of the university, excluding those who were enrolled in the Faculty of Human Sciences in 2015 or before, study at Hongo Campus in Tokyo throughout their academic years.
The university celebrated its 90th anniversary in November, another event which made 2016 a landmark year.

Toyo Gakuen Archives was organized in 2006 to commemorate the 80th anniversary of foundation as well as the closing of Toyo Women’s College. It was opened to the public in 2008. Its main functions include the research of Toyo Gakuen’s history, plus collection, filing, preservation and exhibition of related materials.